The Of the Land Amidst Monoliths Archon Quest in Genshin Impact tasks players with completing a set of missions across the nation of Liyue.

One of these missions is a ghost hunt in the capital city of Wangshu, and it’s been the source of headaches for a lot of players.

The mission prompt simply states: Find a place where you can see the whole Witness Sigil.

You don’t get much in the way of hints — nothing but an image of the vigil and a marker indicating its general whereabouts in Wangshu.

The good news is that the spot to see the whole Witness Sigil in Genshin Impact is a lot closer than you think.

To start the Wangshu sub-quest, you must have unlocked the Of the Land Amidst Monoliths Archon Quest. This requires an Adventurer Rank of at least 23.

Open up your map and teleport to the Wangshu Inn. At the top of the stairs, you’ll have a short conversation with Xiao.

Talk to the inn’s owner, then head up to the balcony for a dialog with the inn’s chef. Now, head over to the kitchen where you’ll encounter the ghost of a little girl.

Then, it’s back to talk to the chef, and then the owner once more before heading upstairs to the second floor.

Go to the Top of the Stairs in Wangshu Inn

You’ll find a painting of the whole Witness Sigil at the top of the stairs in Wangshu Inn. Take a moment to commit its shape to memory.

This is the shape you’ll be looking for once you head out into Wangshu. Now, you can exit the inn and begin your search. 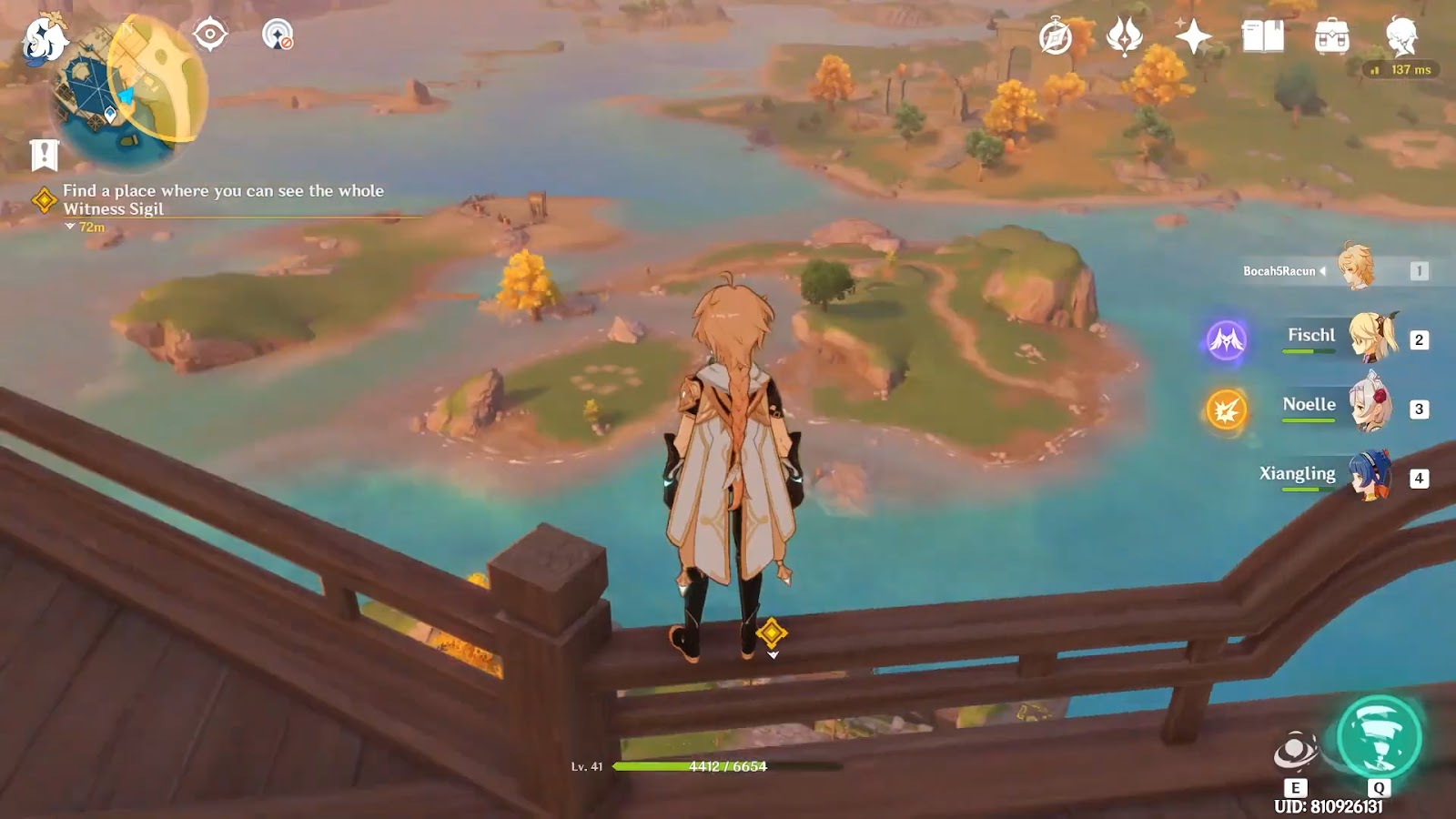 Face northeast towards the center of the yellow circle on your mini-map.

Once you’re outside, head up the stairs until you reach the balcony on the upper level.

You should be able to see the large yellow circle on your map indicating the general location of the Witness Sigil.

Face northeast and hop off the balcony, then glide down to the center of the yellow circle. As you glide down, you should see a pair of rocks with glowing, yellow marks on them.

Lining Up the Sigil Fragments 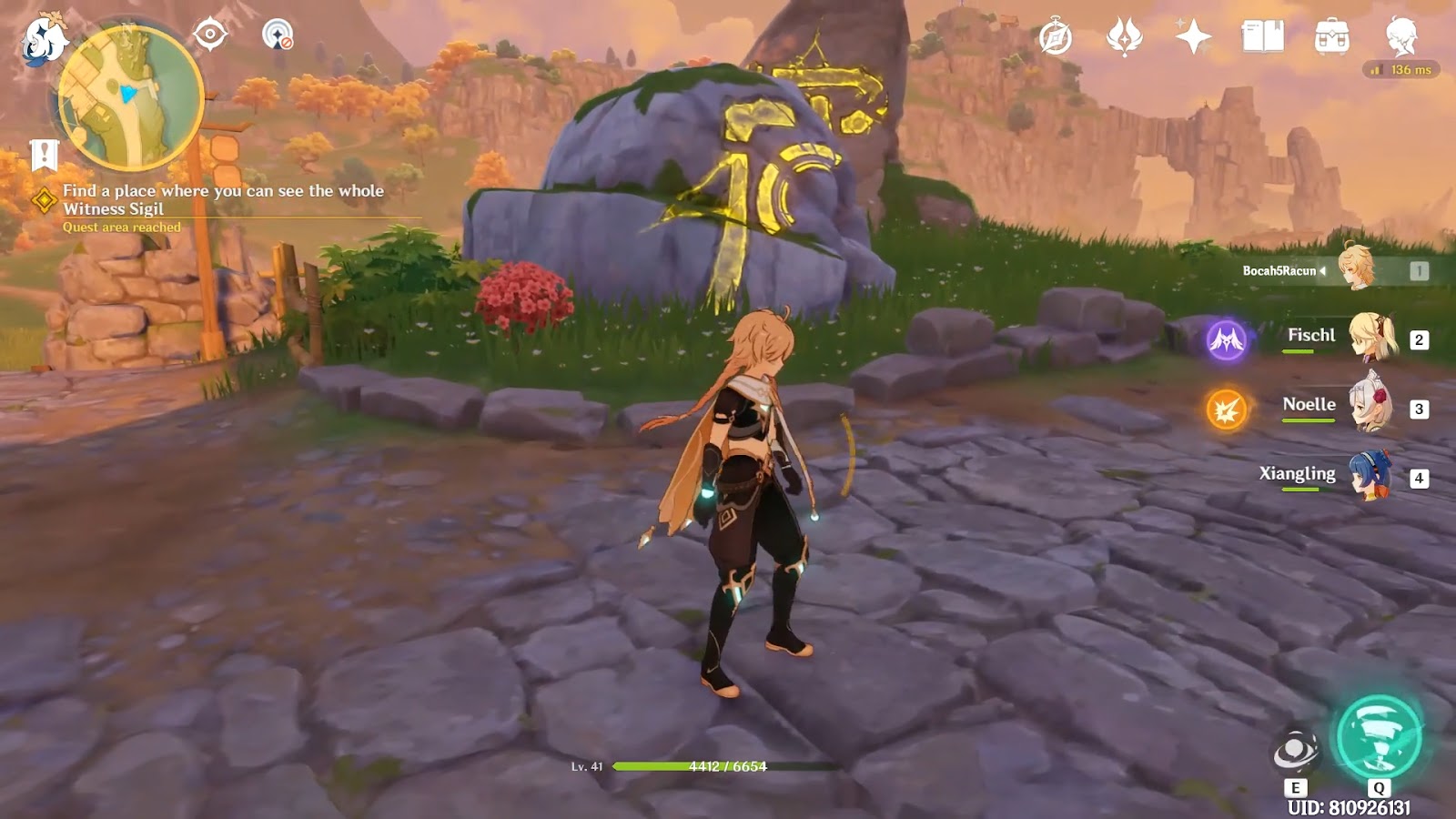 Align the markers to recreate the whole Witness Vigil.

Each of these marks makes up a fragment of the Witness Sigil.

Your job is to find the right angle and position that will line the fragments up and form the whole Sigil. You won’t have to go very far. 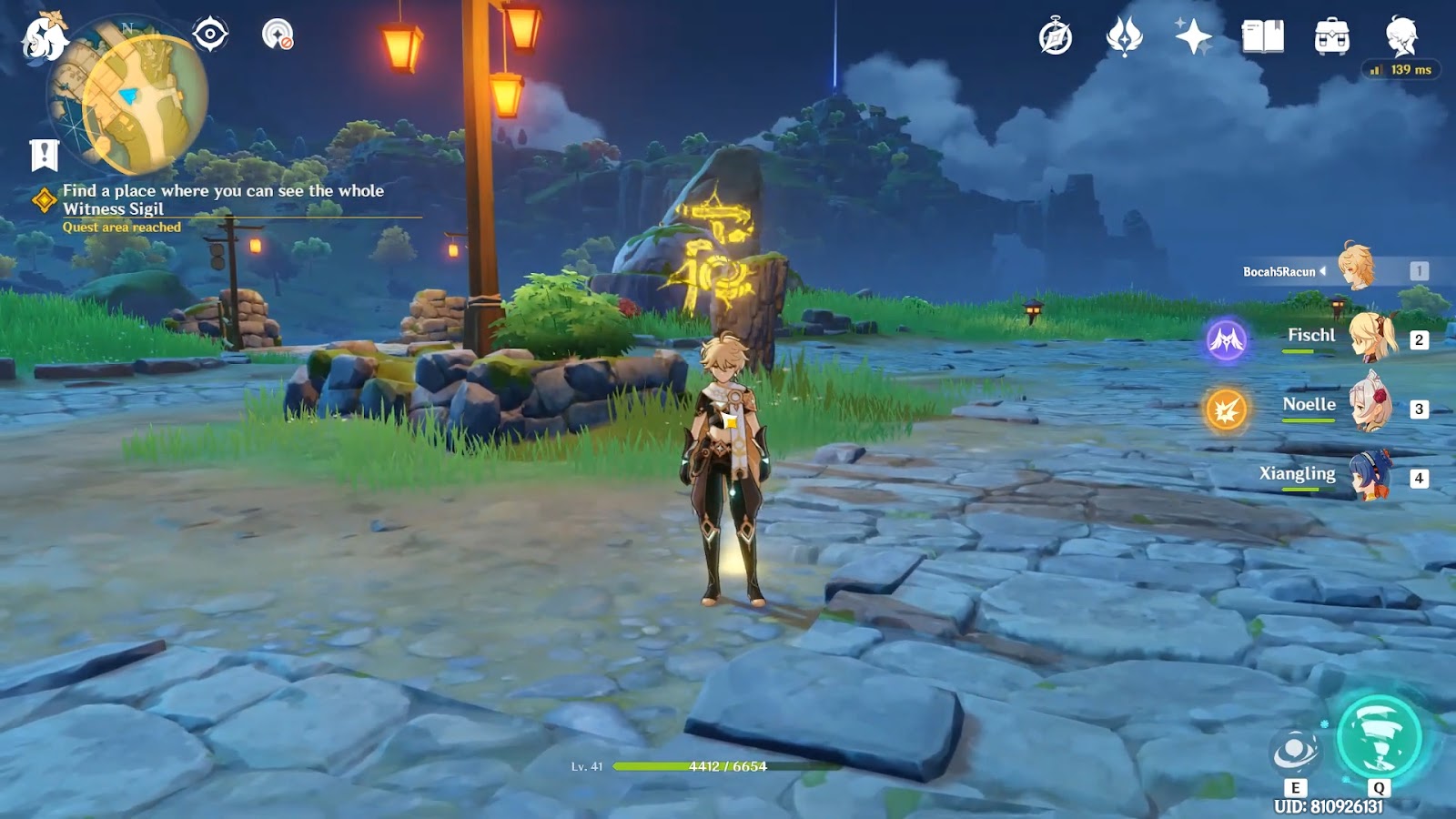 This yellow dot on the ground is a clue to where you should stand.

Pay attention to the ground around you, you should find a glowing yellow dot a few yards southwest of the large rocks.

Stand on that yellow dot and face the rocks, then move your camera around to align the markers until you’ve recreated the Sigil.

Hold the position for a bit and a visual burst will appear around the Vigil, indicating you’ve completed the shape.

If the mission hasn’t completed, try using the in-game timer to go from Nighttime to Daytime.

Once you’ve aligned the markers and recreated the whole Witness Sigil, the ghost from the kitchen will appear nearby.

Just follow her to complete the final steps of your quest!