If you’ve ever wondered what it’d be like to see WALL-E go toe-to-toe with a Goose, there’s no better time than now.

Since Rivals of Aether mods became available via the Steam Workshop, community creators have been hard at work adding new custom characters into the game.

Check out our list of some of the best custom characters available on the Rivals of Aether Steam Workshop along with the links to download them.

The charming little guy also boasts custom animations, sound effects, and a special move that features a cameo from another beloved character from the film.

The time-traveling hero from the classic SNES JRPG, Chrono Trigger, jumps into the fray, sword swinging.

He looks just like he did in the original games — little surprise considering his sprites and animation seem to have been lifted straight from the SNES cartridge.

Crono is agile, has a great Down + Special, and his forward air is completely overpowered.

Since so many of Crono’s skills can be canceled, he has the best combo potential of any custom character on his list. The cherry on top: they even got the original voice actor to do his lines.

Spiky-haired Travis Touchdown was the protagonist in the criminally-underrated hack-and-slash, No More Heroes.

Fans of that game will appreciate the attention paid to the details in Travis’ look.

Everything’s here — the shiny glasses, that wild hair, and of course, his iconic beam katana (totally not a lightsaber).

Much like Cloud’s Limit Break in Super Smash Bros, you want to use your taunt to keep the battery in Travis’ beam katana charged for maximum battle effectiveness.

Meta Knight is a Smash Bros. mainstay who relies on positioning and careful counterattacks to win rounds.

The version that community creator Aurum made for Rivals of Aether is inspired by the Smash original but tweaked for the quicker pace and combo-heavy style of Rivals of Aether.

Meta Knight is incredibly mobile in the air and has great recovery, and the ability to cancel virtually any move into his Back + Air makes him a combo-chaining beast.

Not every custom character is meant to be treated as a legitimate addition to the Rivals of Aether roster.

The Joy Con custom character mod lets you play as a pair of Nintendo Switch Joy Cons, complete with a frustratingly accurate simulation of the controller drift that the Joy

Cons have become notorious for. And for maximum memery, you’ll have to check out Joy Con’s weird and kind of disturbing taunt animation.

According to the official Steam Workshop page, 100% Accurate Fox was made as a response to all the Sandbert skins in the Rivals of Aether Workshop.

This character is completely overpowered and plays nothing like the Fox from Smash, but he’s on this list because of the sheer number of Rivals of Aether videos on YouTube that star the guy in the thumbnail.

Even Zer0 got in on the hype, creating a series of Rivals videos that all began with 100% Accurate Fox.

It’s the goose from Untitled Goose Game. He’s just a bird trying to make his way through the world.

And when things get dicey, his trusty garbage can lid and garden rake will help him take out the trash.

This custom character may have been born from a meme game, but in Rivals of Aether, he packs a serious punch. Just prepare to have your ears ruined by the incessant honking.

After a perilous journey through the stars, the pill-shaped spaceperson from hit game Among Us has landed on Aether.

The version of the Crewmate we get in Rivals of Aether is a bit more prone to violence than what we’re used to. Perhaps they’re not who we think they are?

Creator CircleGuy has cleverly implemented a move set for Crewmate that’s based on key elements of Among Us.

For example, Crewmate’s Down + Special summons an Emergency Meeting button that pulls in nearby players, and their Forward + Special deploys the cursor from the Asteroids task.

Guadua is an earth-bending panda bear and the first workshop mod ever released for Rivals of Aether.

She’s a hard-hitting bruiser with a devastating down smash and a powerful healing ability.

Designed by Daniel Fornace himself, she was released to demonstrate the quality of characters community creators could make with Steam Workshop integration.

Players are still divided as to whether not Guadua should be considered an official part of Rivals of Aether lore.

Fornace went all out with this release, essentially promoting Guadua as if she were an official addition to the Rivals lineup.

Guadua comes with handmade animations, her own stage, and even custom victory music. 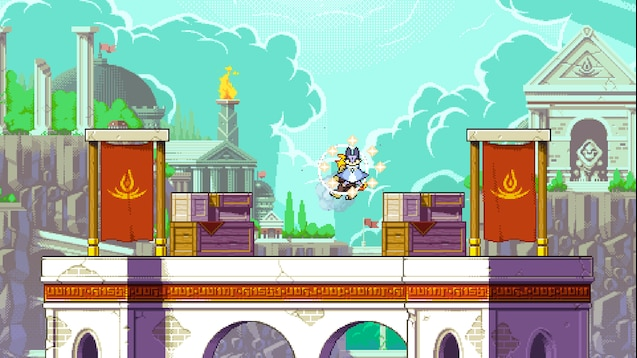 Astra comes as part of a four-character set that’s of such high quality you’d swear it was an official update.

Every character in that set comes with custom-made animations, sound effects, music, and backstory.

Wishdream even went above and beyond to craft custom stages for each of their custom characters.

Though all four characters in The Rivals Expansion Project are incredible, we chose to highlight Astra for her innovative trap-based move set.

Much like Pokemon Trainer, Astra can rotate between three tarot cards, each with their own Spell (Forward + Special) and Trap (Down + Special).

This makes her incredibly versatile and capable of handling virtually any matchup.